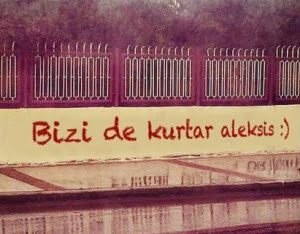 
How the Turkish public responded to SYRIZA’s victory
Vangelis Kechriotis
After appearing on Turkish TV news the day after SYRIZA’s victory in the Greek parliamentary elections, the journalist who interviewed me said she knew the Greek alphabet and a few expressions. She also expressed a desire to take Greek language lessons. I promised to find her an experienced tutor and called a woman who teaches Greek lessons at the History Foundation (Tarih Vakfı), which has a long tradition teaching this language, and at Kadır Has University. When I explained why I called, she started laughing. “With all that is happening in Greece these days,” she said, “the number of people who have applied to learn Greek has suddenly increased.”  This is just one of the indirect consequences of the Turkish public’s fascination with SYRIZA and Alexis Tsipras.
In the days after the elections, social media in Turkey was inundated with enthusiastic messages about SYRIZA. People from diverse political backgrounds – supporters of the main opposition Republican People’s Party (CHP), the Kurdish leftist Peoples’ Democratic Party (HDP), the leftist Freedom and Solidarity (ÖDP) and many from outside of party politics – felt as if this was happening in their own country. Predictably, this was not the case with supporters of the ruling Islamist Justice and Devlepment Party (AKP), the Nationalist Movement Party (MHP) and the Turkish Communist Party, which supports the Greek Communist Party and, at least officially, does not share the enthusiasm about SYRIZA. I even received messages from colleagues who congratulated me, as a Greek, and seemed thrilled, hoping that one day this may happen in Turkey too.
The celebration among at least half the Turkish population could be described as a “longing for the left”. It also demonstrates a romanticization of what SYRIZA represents and an ignorance of its historical roots. CHP leader Kemal Kılıçdaroğlu publicly saluted the victory of a party whose ideas, he believes, are close to his own. This statement coming from the leader of the party founded by Mustaf Kemal Atatürk himself looked weird, to say the least. SYRIZA traces its roots to the communist left and has never ruled the country. It certainly does not have the CHP’s historic connection to and enthusiasm for the military, which has been responsible for three major coups in this country. At the same time, Kılıçdaroğlu urged party members to be inspired by SYRIZA’s policies in order to counterbalance what he considers an attempt by the HDP to capture votes from CHP supporters1. HDP leader Selahattin Demirtaş, in turn, tweeted to the new Prime Minister Alexis Tsipras in Turkish and in Greek2. Narratives comparing the two leaders are often posited.
Among pro-government circles, however, the opportunity to claim a moral victory was not wasted. An editorial in daily newspaper Akşam claimed Tsipras said to Turkish Prime Minister Ahmet Davutoğlu that his people have been following and learning from AKP policies for the past 13 years. This is what lies behind its victory, the paper said3. Bülent Arinç, deputy prime-minister and government spokesperson, after expressing with a strong hint of irony his surprise that Greece is not a secular state, drew attention to the fact that an atheist refused to take a religious oath and this did not lead to a crisis. The remark was an indirect way of claiming that any prime minister who took a religious oath in Turkey would lead to an outcry. He did not say what would happen if the same prime minister declared him or herself to be an atheist. The most imaginative appropriation of SYRIZA’s victory was attempted by Yıldıray Oğur, in the conservative daily newspaperTürkiye. Oğur, once a member of a self-proclaimed “anti-authoritarian movement” called the Young Civilians (Genç Siviller), concluded that Tsipras is the brilliant leftist leader that Turkey so desperately needs to replace his statist, authoritarian Turkish counterparts. If necessary, Turkey should better bail out Greece in exchange for transferring Tsipras4.
Beyond political expedience, geopolitics expert Dr. Nejat Tarakçı offers a more colorful assessment in an article called “Pericles’ Return” published on the Turkish Asian Centre for Strategic Studies website. Tarakçı argues Tsipras’s victory is a return of the spirit of Athenian Democracy, 2500 years after its emergence. He asserts it is a development more important than the French revolution, thanks to policies that are “human-oriented” and “based on honor and patriotism”5. It was also interesting to see an attempt to co-opt Tsipras not only politically but also ethnically. According to Hudutgazete, a newspaper distributed in Turkey’s Thracian region, when Tsipras visited Turkey in 2010 he mentioned his grandparents were part of the 1923 population exchange who lived in Babaeski in eastern Thrace and said that was why he felt at home there6. In its turn, this makes people in Turkey, especially others who were part of the exchange (known asmübadil), as well as notoriously secular pro-CHP and self-proclaimed leftists, feel proud of sharing a common background with this new leftist leader.
Meanwhile, his popularity may also be attributed to his youth and handsomeness. This indicates that beyond a “longing for the left” there is also a longing for charm in politics. The CHP deputy for İstanbul Nur Serter left no doubt when she commended Tsipras as “a dynamic, handsome young man” to which she added “I do not mean to say that there should be a CHP male beauty contest. I say this to underline the enthusiasm that someone with a similar profile can unexpectedly generate among people”7. The cult of personality has always dominated the political landscape in Turkey and Tsipras is no exception. There is no doubt that the Turkish public will follow the trajectory of SYRIZA and its leader with excitement for the months to come. But the motivation for young people to graffiti “Alexis, save us too” will fade in time. Turkey’s thirst for ideological salvation by one of their own will have to wait for a while longer. We all hope that Tsipras will first save us Greeks.